Following the successful conduct of the election, held on site Syros Industrial Museum and the elections for the election of the board of the Friends of Technical Culture Syros, the newly elected Board was constituted, on Tuesday, October 30 2012 as follows:

The wheel of Patris at its final location

On September 8th, 2010 the wheel of the steamship Patris was transferred to its final location, on a specially constructed base in the courtyard of the Industrial Museum of Hermoupolis, where the process of its restoration by a specialised scientific team has already begun. The wheel of Patris weighs ten tons, measures six meters in diametre and rests on a cast steel beam measuring 40 cm in diametre and 5 metres in length. The wheel constitutes an exceptional and rare artifact demonstrating the art of shipbuilding. The entire operation was sponsored by the Pateras family and the last phase of transportation was realised by the Neorion Shipyards of Syros, which provided specialised equipment and a team of ten people.  +++

The Museum is happy to announce that the documentary “Patris, Lost in 1868” won an award at the International Film and Video Festival, organised by the Archaeology Channel between May 18th and 22th, 2010 at the Soreng Theater, Hult Center for the Performing Arts in Eugene, Oregon (USA). 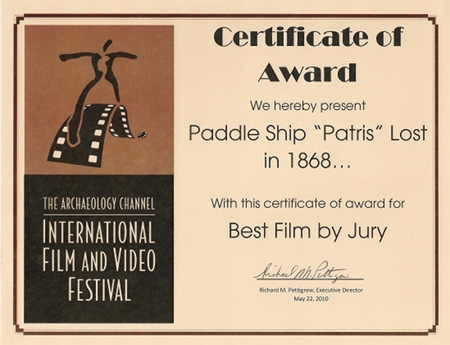 A hundred films from 32 countries entered the festival. Nineteen were chosen to compete. “Patris, Lost in 1868″ won the Best Film (by Jury) as well as the Best Cinematography (by Jury) awards. This is a significant distinction, as the Greek production faced brilliant competition entries from the likes of the National Geographic and the History Channel.

New acquisitions by the Museum

In November and December 2009, Mr. Constantinos Filippou, who had already donated a large collection of ship schematics and a complete naval technical office including its instruments to the Museum, funded the digitisation of the schematics collection. Interested researchers may now study these schematics in the Museum library.

In December 2009, Mr. Demetris Voikos, a mariner, donated the blacksmiths’ tools his father, George Voikos, had used in his workshop from the 1940s to 1977 to the Museum.

On January 19th, Mr. Pavlos Alifragkis, a carpenter, donated all his equipment and tools to the Museum. These tools had been used by his family for three generations.

A museological-museographical study, which aims to upgrade and update the Museum’s existing collections, is already under way.